This weekend I went to Cardiff to visit my Dad and his wife. They moved there about three years ago and I always love going to stay, as there is loads going on for a city that is so walkable. There are plenty of great pubs in Cardiff, so I’m sure I’ll write about my visits again at some point, however I’m just going to focus on a handful of places in this post. 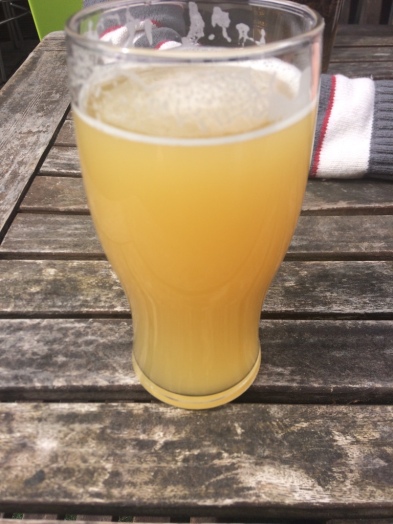 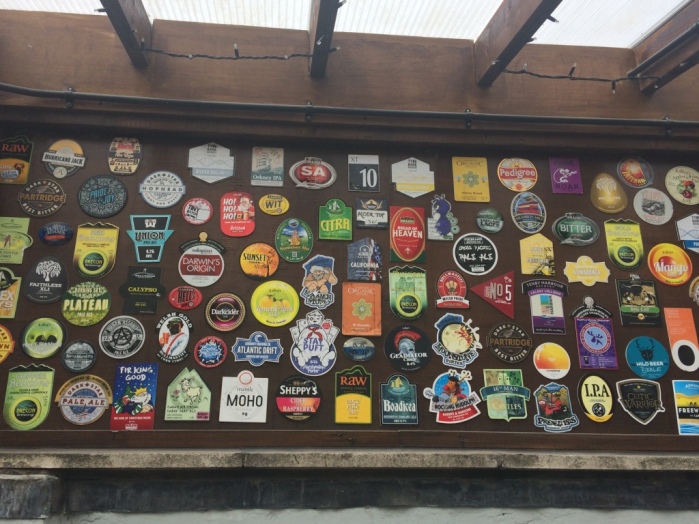 Loved this craft beer wall outside at The Pen and Wig

It was a lovely day on Saturday, so we decided to begin our afternoon crawl in The Pen and Wig on Park Grove, which has an excellent beer garden. I’ve been there a few times before and they always have a wide selection of cask beers available, as well as a few keg options too. I chose a beer I hadn’t had before which was recommended to me by one of the lovely bar staff – Mr Mojo Pale Ale from local brewery Crafty Devil. I always try to sample local breweries when I can and this American style pale did not disappoint. Mr Mojo is intensely hoppy and full of tropical flavours and left my Dad and boyfriend jealous – I would highly recommend.

Next on our mini crawl was Zero Degrees Microbrewery and Restaurant, which as well as having a large venue in Cardiff, has bases in Bristol, Reading and Blackheath, London. We had not been here before so I was keen to check it out. I chose a Belgian Witbier which was very much up my street. I would say it has quite a subtle taste but if you like a wheat beer, as I do, then you will like this. I would like to visit Zerodegrees again at some point to try the food, as there were amazing aromas coming from the kitchen during our visit.

Our last pub stop is one of my favourites in Cardiff – Tiny Rebel Brewery. The brewery itself is based in Newport and I’ve not had the chance to visit yet, however the bar in Cardiff is somewhere I try to go to every time I’m there. They always have an extensive selection of beers on tap, mostly their own but a few others too, and I’ve visited before when they’ve had tap takeovers as well. I had the Dutty Vermont Session IPA – a cloudy and golden beer with lovely notes of grapefruit and citrus. I’ve heard some say that they find this a bit hazy, but I like hazy beers personally. My Dad had two pints of Tiny Rebel’s Stay Puft Nitro – a marshmallow porter and probably one of his favourite beers ever. He first discovered this far too easy to drink porter on our last visit to Tiny Rebel and he has been raving about it ever since. My boyfriend also opted for the Stay Puft Nitro and gave it an equally glowing review – commenting on how easily it goes down. I’ve never been much of a porter drinker – I do like it but I always find I can’t drink too much of it – however this one could change my mind.

To finish this blog I want to mention two great bottle shops in Cardiff, which we visited on Sunday to stock up before our trip back up to Manchester. The first is one that my Dad has taken me to before and is a bit of a hidden secret (well, that’s what my Dad says anyway). It’s called Discount Supermarket and it’s on Whitchurch Road. You would never know it without going inside, but this place has one of the most incredible beer selections I’ve seen. It has a huge amount of Belgian beers, as well as lots and lots of beers from UK craft breweries and American breweries. I picked up loads from there, including an old fashioned lemonade IPA from Evil Twin Brewing (Brooklyn, New York), a ‘Wanna go to the Sun’ citra and mosaic pale from Lost and Grounded (Bristol, UK) and a brewery I’d never heard of before called Whiplash who brewed this particular beer at Larkin’s Brewing Company (Wicklow, Ireland).

While on our way to visit Discount Supermarket, we also discovered another gem on Whitchurch Road – Pop’n’Hops. We’d never seen this little place before, which sells both records and craft beer, despite it being there for over a year. It has a great selection of beers from the UK and from across the world and the staff are super friendly and helpful. My boyfriend had a quick peruse of the records, but I was a bit too over excited by the beer selection. We chose a Guerrilla IPA from CR/AK Brewery (Padova, Italy) that I had been keen to try for a while, as well as a few from Welsh breweries West by Three (Swansea) and Rival Brewing Company (Cardiff).

If you live in Cardiff, or are just visiting or passing through, these bottle shops are not to be missed. If you do find yourself there at some point, please do get in touch and let me know what you picked up!

Manchester based beer lover, writing about beer and the women who drink it, love it and dedicate their careers to it. View all posts by beerbabes2018

One thought on “Cardiff Craft Crawl”